If well crafted adventures full of horror and excitment are your jam, then you probably know about Stephen Newton, lead creative of Thick Skull Adventures and co-host of the superb podcast of “Black Ink Red Film”(with Stephen E).

Stephen is author of several Goodman Games DCC/MCC RPG adventures including Attack of the Frawgs, Children of the Fallen Sun and The Corpse That Love Built.

Stephen took some time out to speak with me about writing adventures, his podcast and his new Dark Trails compatible Western-Horror adventure module currently in a Kickstarter Campaign - The Last Will and Testament of Obediah Felkner.

Tell us a little bit about your background and how you found your way in to playing RPGs and eventually writing for them.

First of all, thank you, Mr. Harrington, for asking me for the interview and allowing me to share my stories. I started playing RPGs in the late 70s while in middle school – a friend of mine introduced me to Basic D&D (Holmes Edition) – my first game was exploring Quasqueton in In Search of the Unknown and I’ve been more or less playing ever since.

About 10 years ago, I was going through a “creative-mid-life-crisis” in that I was writing a lot of documents for work, but I wanted to do something more creative and personal. After deliberating of what type of project to bite off, I eventually settled on writing an adventure module with the intent of having it published somewhere. This was right at the beginning of D&D going to 4th edition, so the project took longer than I expected as I learned those rules. I persevered and eventually published The Haunting of Larvik Island for D&D 4E. 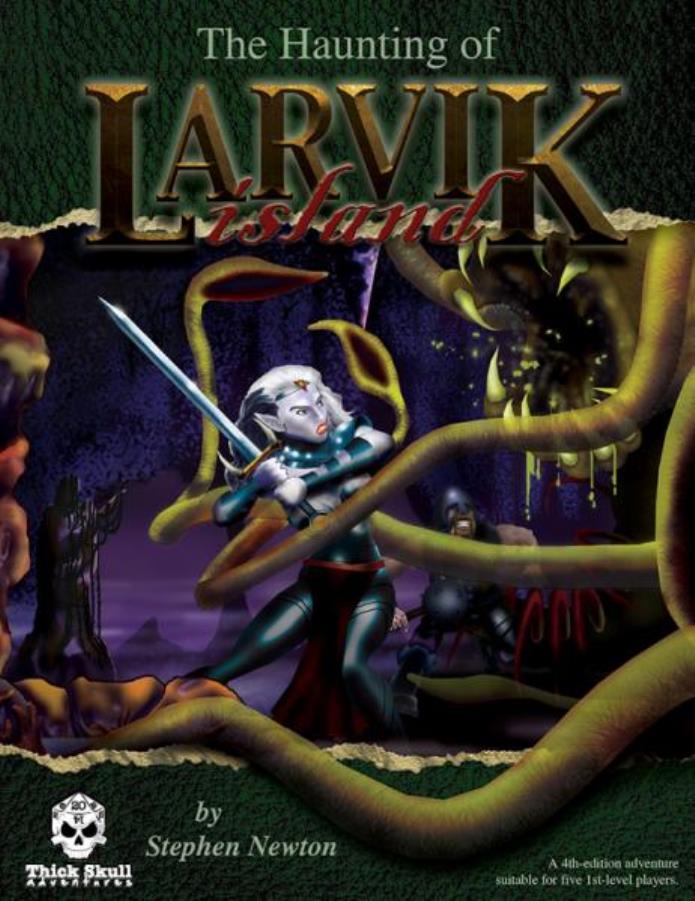 As I started working on the sequel to that adventure, I came across Goodman Game’s beta rules for DCC RPG and decided – this game isn’t even published yet and I like it more than 4E…I’m going to write for it instead. I wrote Attack of the Frawgs for DCC—it was complete before the core rulebook was even published—and have been writing for DCC or MCC ever since. 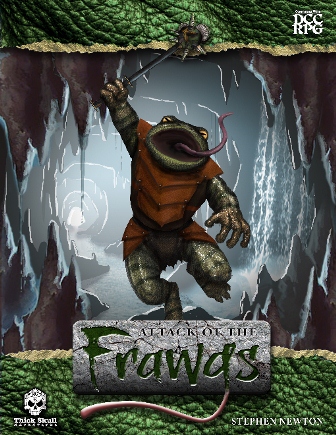 Fun fact: I met Mike Carr, author of B1 In Search of the Unknown at Gary Con IX (2017) and it was probably my biggest RPG fan boy moment ever!

You have a publishing company called “Thick Skull Adventures”, can you tell me how that came to be?

When I first started writing the 4E version of Larvik, I had intended to submit it for publication – specifically through Goodman Games! Halfway through writing the adventure, my childhood friend Ray Wisneski (who also happens to be the owner of my favorite FLGS Game Kastle in Santa Clara, CA) gave me a lot of great advice on the current state of the RPG industry. Remember this was when 4E was just released, Pathfinder was gaining market share, and OSR products like OSRIC and Labyrinth Lord were gaining popularity.

It was Ray that suggested that I self-publish - something I had not considered. Self-publishing added about 9 months to the project to get everything setup, but it’s been really rewarding.

I talk a bit about that experience on my blog here.

And I should say: while I’m the main author behind Thick Skull Adventures, there’s an entire team of collaborators I work with (regular artists like FRK Pyron, Stefan Poag, Danny Prescott, and Cat Harkins, cartographers like Stefan Poag and Judge Jeffrey Tadlock, and my biggest partner in both editing and ideas, Judge Jen Brinkman).

These projects literally couldn’t happen without them.

Do you listen to any music or have any specific rituals you do when writing to get you in the mood or inspire you?

I’m constantly collecting ideas that I think might eventually make it into an adventure. As I come across news articles or ideas, I’ll pop them into an Evernote file.

At some point “A Big Idea” forms and that’s when I start outlining the adventure. I typically do my writing at night after work, so the music I’ll put on is either my Black Sabbath/Ozzy playlist, or my “John Carpenter/Horror Movie Theme Music” playlist.

What was the genesis of the Obediah Felkner Project?

Growing up in California, I’ve always been interested in California History and have always enjoyed visiting the Spanish Missions we have here. The triggering event to write the adventure came when Stormlord Publishing released Black Powder Black Magic.

Reading Black Powder really got me thinking that an interesting story could be told in the genre. It’s taken longer to publish than I’ve expected as I’ve also accepted a couple of projects from Goodman Games with less flexible timelines, so I’ve put Obediah “on the slab” so to speak, while I’ve taken those projects on.

Now that I’ve finished the writing for Creep, Skrag, Creep! I can focus on all the work required to finish Obediah. 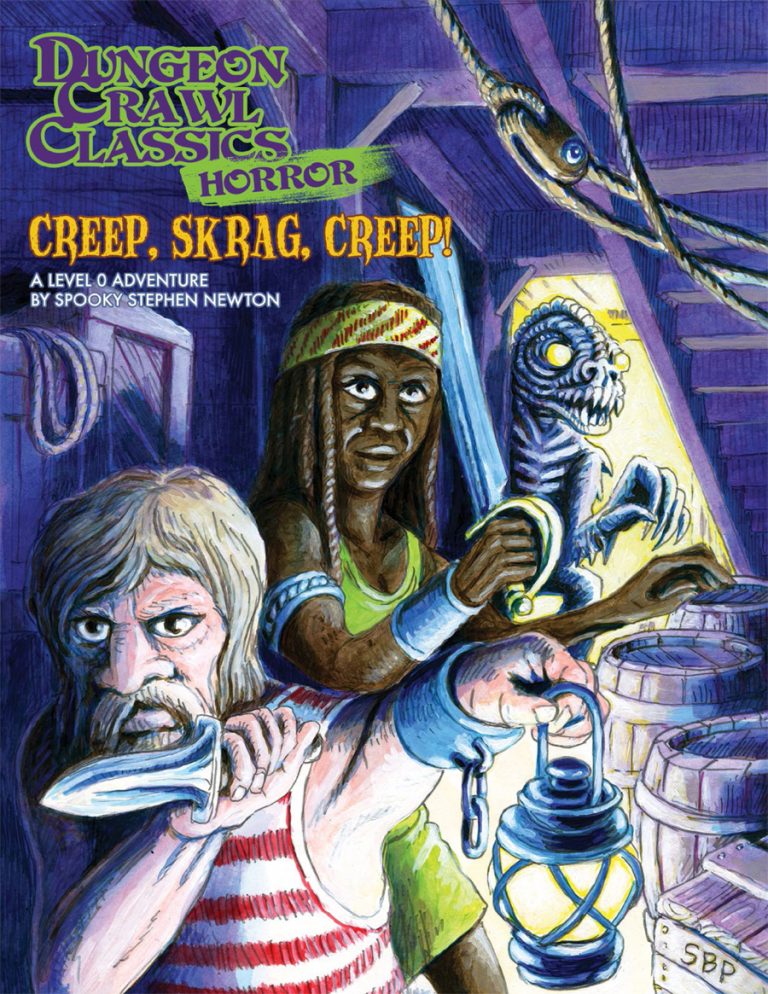 So tell me about your latest Kickstarter project and how can people get involved in it?

The Last Will and Testament of Obediah Felkner is the horror-western for DCC RPG. It’s standalone, meaning it uses straight DCC rules, you don’t need Black Powder Black Magic or David Baity’s Dark Trails to run it… although if you own one of those two supplements, you’ll certainly be able to use them together. In fact, David Baity and I have been collaborating with ideas on each other’s projects for a couple years now – he’s run The Last Will… with Dark Trails at a couple of cons. People can check out all the details on Kickstarter.

Your adventure “Creep, Skrag, Creep” is the Halloween adventure in GG new horror line - tell us a little about that.

The Corpse That Love Built had been released for a couple months when I reached out to Joseph to see how well it was selling (apparently it was doing well and was in Goodman Game’s Top 10 Adventures for 2018 despite only being released in Oct.) 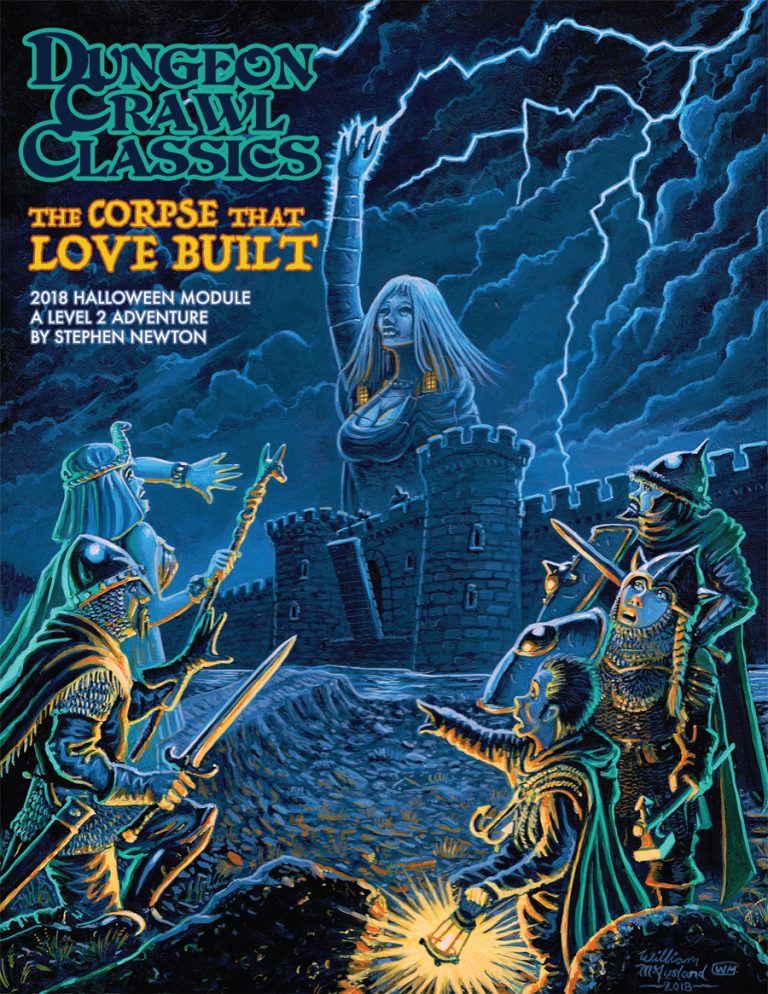 As part of that conversation, Joseph said, “You’re actually getting a name for yourself as the “horror guy” – do you have any ideas for 2019? I had explained: They Served Brandolyn Red was my ghost story, Corpse was my classic monster story, and the concept I wanted to try next was as “stalking monster” story similar to Alien or Carpenter’s The Thing (two films I love!) Through a series of back-and-forth emails with Joseph, I tightened up the idea, and what judge’s will read is (hopefully) an enjoyable blend of Alien meets A.Merrit’s Creep Shadow meets Dan Simmon’s The Terror. The biggest challenge was trying to game-ify a “stalking monster” vibe, which isn’t the typical trope in DCC adventures which tend to be more dungeon/wilderness exploration and extreme-magic/chaos gods centric. I wanted the setting to feel claustrophobic and dangerous. I hope judges and players enjoy it.

What projects are you working on right now?

The Kickstarter for The Last Will and Testament of Obediah Felkner is in full swing and should be ending on Oct 7.

While the adventure itself is complete, the Kickstarter campaign has achieved some stretch goal targets- so I will be doing some supplemental writing. Once the initial Kickstarter campaign and additional writing is done, I will then move into the project management phase of releasing an adventure (commissioning art, layout, sending project to printers, packaging the books, mailing, etc.) 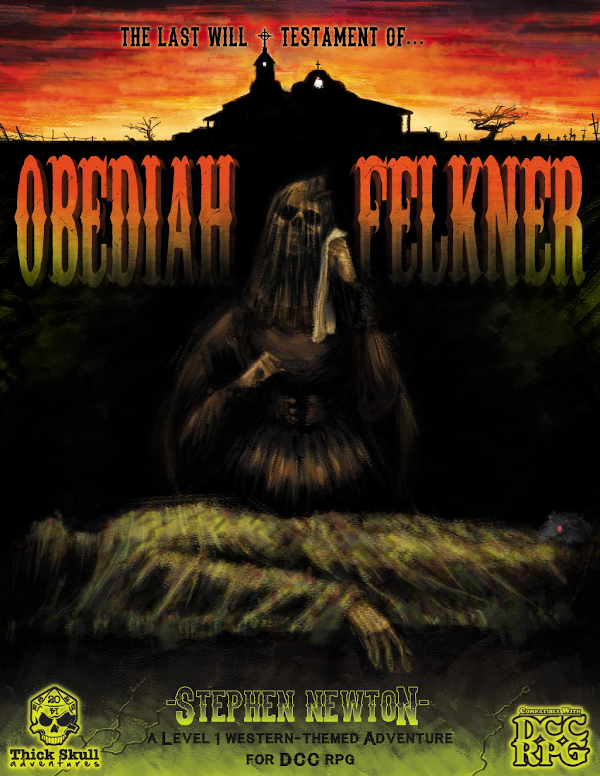 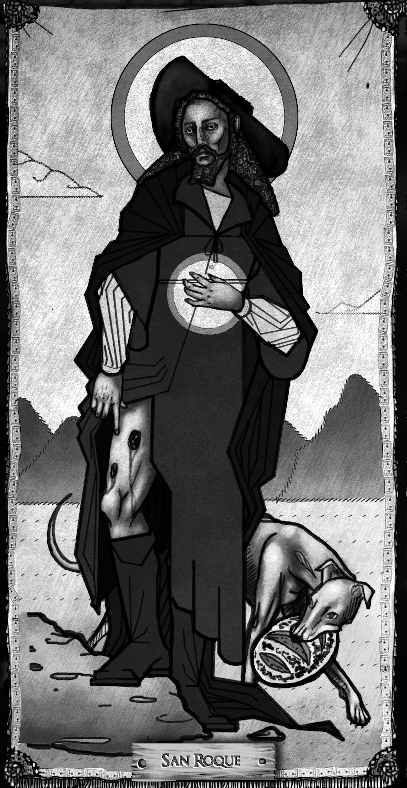 From a writing perspective, I’m in the early phases of writing a new Mutant Crawl Classics RPG (MCC RPG) for Goodman Games. That project is in the really early phases so I have no idea as to when that will be released. I’m also working on some re-prints of my early adventures.

Do you take pitches or submissions?

As of this writing I have not – not because I haven’t been pitched some great stuff, but because releasing one of these adventures takes so much time and work, you really want to be in love with your project as you’re going to be spending quite a bit of time with it. As I do this as a side-hobby, I’ve prioritized my own writing.

That said… for the upcoming reprints of my older adventures (Frawgs, Larvik Island, and Stronghold of the Wood Giant Shaman) – I’ve reached out to three “community favorites” asking them to create a pitch that is “thematically similar” to the adventure that I can include as a bonus adventure. I’ve received one of those submissions back and will be adding it as a mini adventure that can tie Frawgs to Larvik in the upcoming Larvik reprint.

I love your podcast “Black Ink/Red Film” can you tell us a little bit more about that, and where we can find it and listen to it?

I was inspired to create the Black Ink Red Film podcast (or “BIRF” as I lovingly call it with my co-host Stephen E. Paine) as I was working on The Corpse That Love Built. When I originally started Corpse, I was inspired by the Universal Monster movies (Frankenstein, Bride of Frankenstein, etc.) As part of writing that adventure, I went back and read the original novel, Mary Shelley’s Frankenstein.

I was struck by how different the creature of the novel was from what most probably think of as the Frankenstein monster as portrayed in movies. The novel creature is much more articulate, sorrowful, and incredibly spry (at one point in the novel, he runs up a sheer mountain like a billy goat!) This got me to thinking, “Wouldn’t it be cool to have a podcast where you discuss horror novels, how those novels are adapted to film, and the significant differences between the two that the director makes that either significantly changes the story or the character. There are some great examples of this (e.g. Kubrick’s The Shining vs. King’s The Shining.) Given that my friend Stephen E. like to sit around talk about horror anyway, and as I’m a big fan of book-podcasts like Sanctum Secorum and The Appendix N Bookclub, I thought I’d give podcasting a shot.

You can find Black Ink Red Film on iTunes, Google Play, and all the other usual locations.

First of all, I want to say thank you to all the players, judges, and fans who have ever taken the time/effort to buy a product, post a comment, or send an email related to anything I’ve been involved with. The greatest sense of satisfaction I get from these projects is the sense that there are other gamers out there who have taken the time to read (and hopefully enjoy) something I’ve helped to create. I love it when I hear a story like, “My girlfriend ran her first adventure, and it was Attack of the Frawgs…” I remember so clearly the joy and wonder I felt exploring B1 In Search of the Unknown and sincerely hope that I can use my love of writing to spread a similar bit of gaming joy to others. Thanks again for the opportunity to share some stories.

Editor’s Note: Make sure you check out Stephen’s Horror-Western “The Last Will and Testiment” of Obediah Felkner for Dark Trails/DCC RPG on Kickstarter now!